PHM tool is model-based user interface which the user creates his system using various mechanical and electrical equipment’s, but can also calculates the reliability, failure rate and probability of task completion (POTC) of the created system. In addition, the PHM Tool offers the user the ability to formulate his own components and add them to the system. PHM Tool can also work with a real robot. Data from the sensors on the real robot are published via ROS topics. By subscribing to these topics in the PHM Tool, the system’s failure rate, reliability and POTC values are calculated together with the data which is obtained from the sensors.

NOTE: You can access our article “Prognostic & Health Management (PHM) Tool for Robot Operating System (ROS)” published as dissemination activity of this project from this link.

About the Prognostic and Health Management (PHM) Tool

Basically 2 different operations are performed in the PHM Tool: 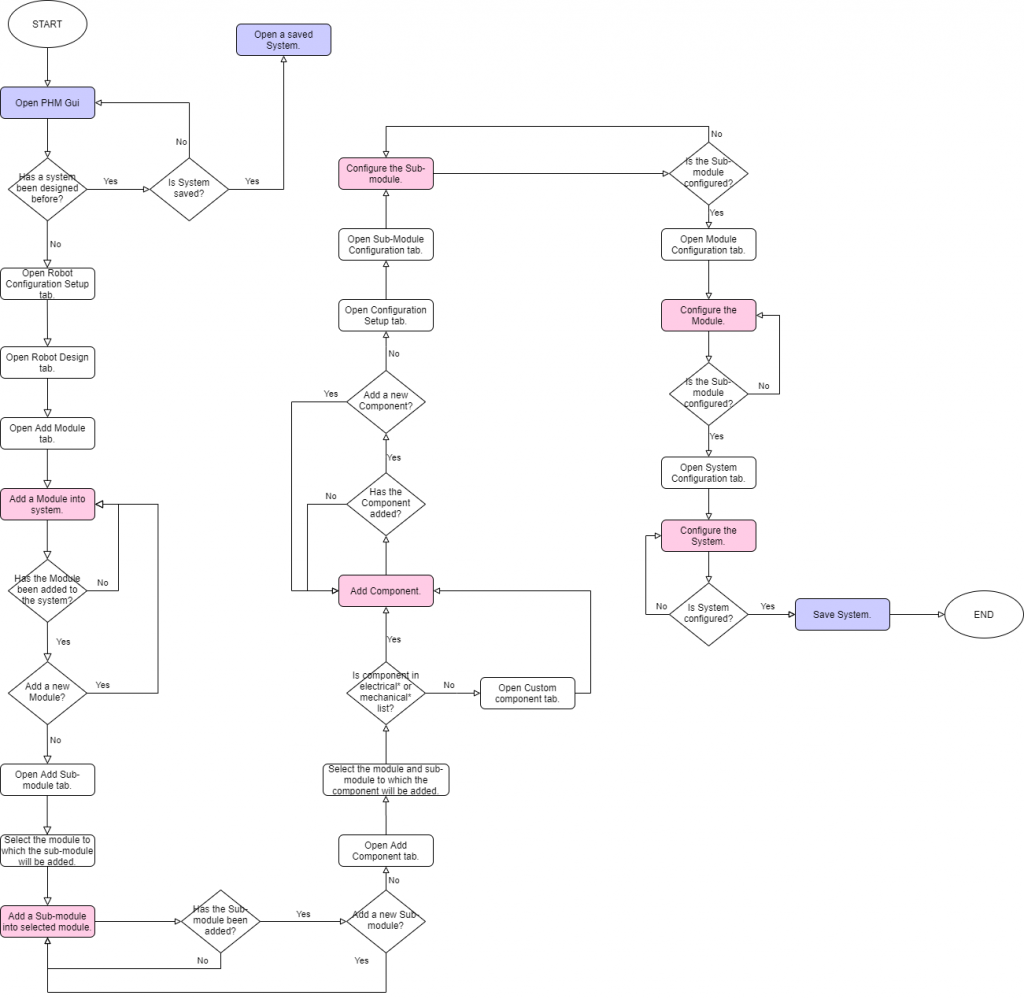 – Fig.1 Flowchart of the operations performed on the “Robot Configuration Setup” tab –

– Fig.2 Flowchart of the operations performed on the “Monitoring and Analysis” tab –

“Robot Configuration Setup” tab is the tab where the parts (modules, sub-modules, components) in the robot are added, created and configured.

In the “Monitoring and Analysis” tab, the configured system in the “Robot Configuration Setup” tab is presented to the user in real time by calculating the hazard rate, reliability and POTC values according to the specified reliability model and unit. In addition, sensors can be added and the results are shown in real time.

Since PHM Tool is a modular tool, the modules and submodules in the robotic system must be created at the interface. Therefore, these processes will be worked on the “Robot Design” tab (Figure 3). 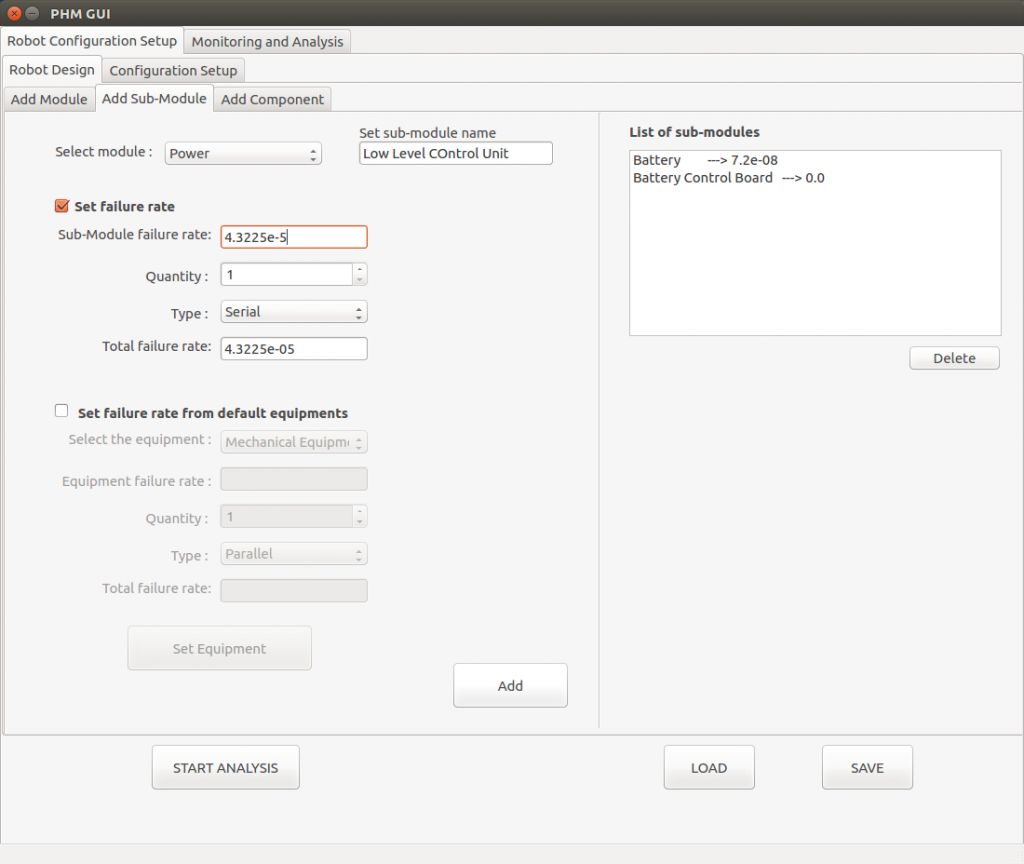 The configuration of each component, sub-module and module is derived by defining their serial or parallel relationships with each other. In this way, the failure rate values of the sub-modules, modules and system are calculated. The configuration process will be run in the “Configuration Setup” tab (Figure 4). 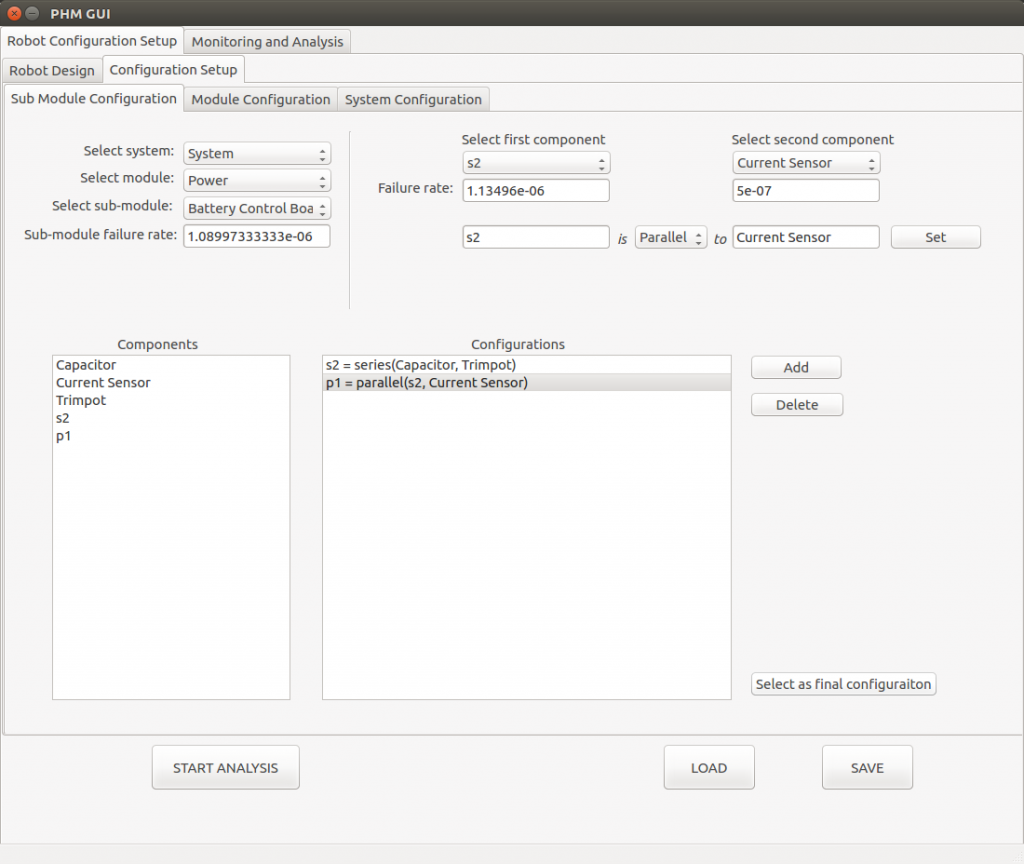 The user can save a system he created and configured in this tab, or load a system he previously saved to PHM Tool. Saving and loading operations are performed by using the “Save” and “Load” buttons on the “Robot Configuration Setup” tab. 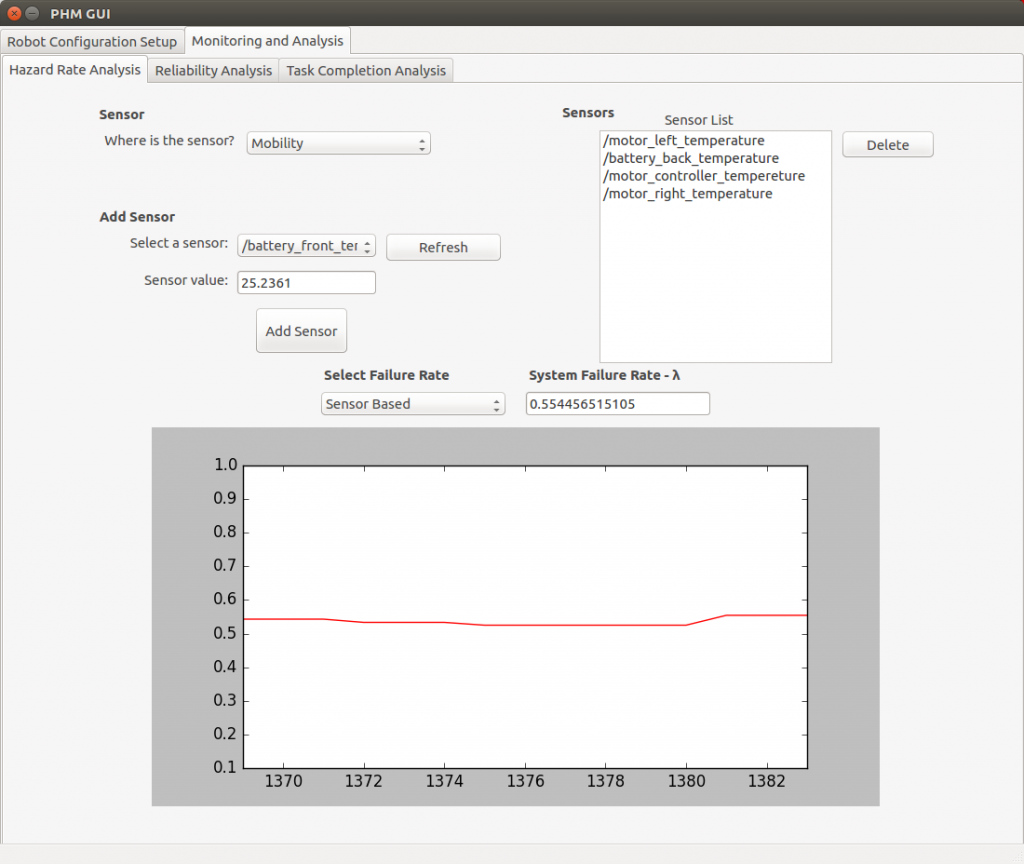 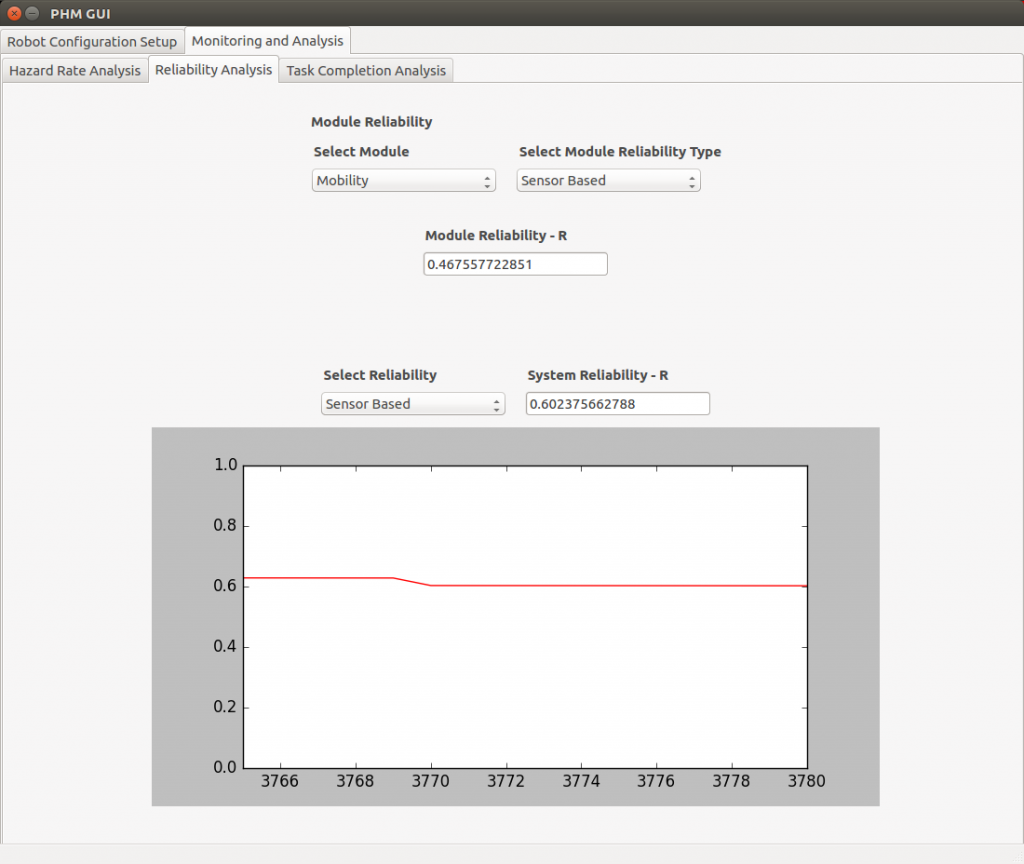 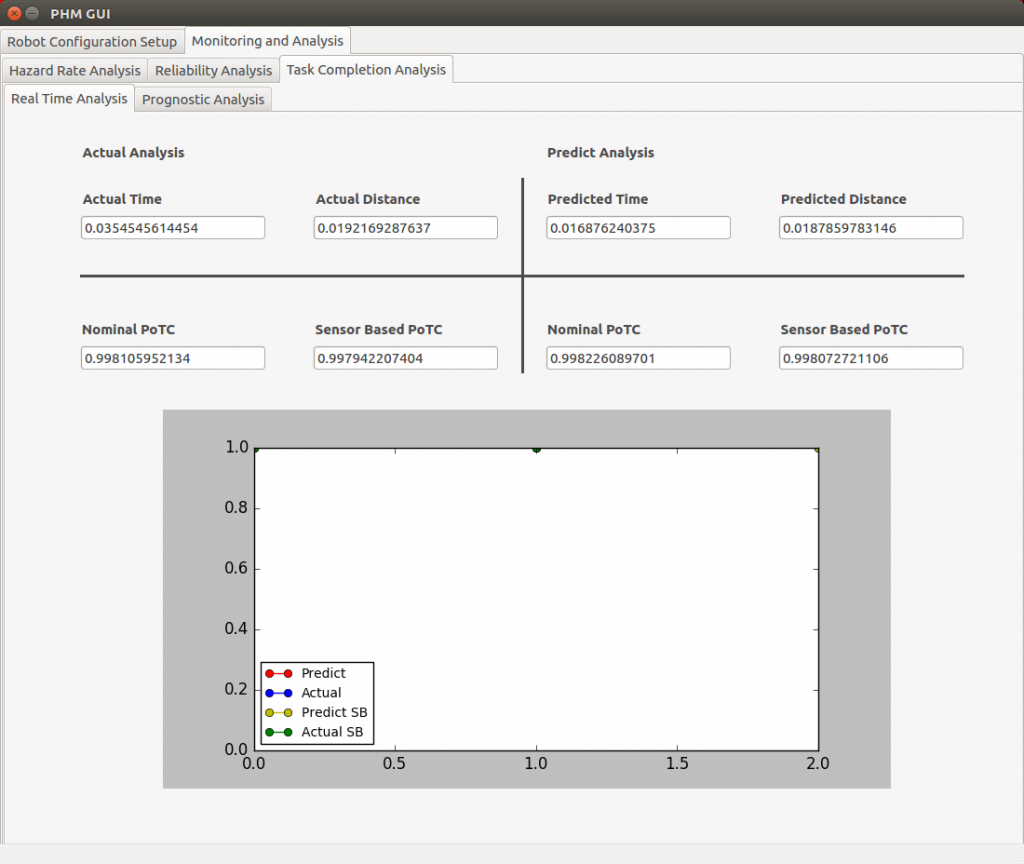 Application of PHM Tool in a Mobile Robot

In this use-case, firstly data acquisition system is developed and instrumented to the OTA. With this DAQ system, sensory data is gathered from OTA and recorded to the bag files. Various sensors on OTA are gathered to analyze the effect of the data from the environment (temperature, humidity, vibration, voltage, current etc.) on OTA. Data from these sensors are published from ROS topics and subscribed to these topics via the PHM Tool to calculate the impact of sensor data on system failure rate and reliability.

After that, PHM tool is used for designing and configuring the OTA for reliability and probability of task completion analysis. For this purpose, reliability and nominal hazard rate data of components are taken from the developed mobile robot (OTA).

Additionally, usage time of components are measured from given missions and system architecture (series or parallel) are configured by the user. Updated hazard rate is calculated with the knowledge of all above.

OTA should be configured by making physical arrangements of these added parts according to each other. As a result of the design and configuration of OTA in the PHM Tool, the hazard rate and failure rate values of the system are calculated. As an example, the failure rate of mechanical bearings is significantly affected by operating conditions such as temperature, rotational speed, and load. In this scenario, the updated hazard rate is be extrapolated over a range of temperature and nominal conditions by using simulation and recorded data. GAZEBOsim is used for task completion analysis and SMACH tool is used as finite state machine for controlling high-level behavior of OTA.

The work done in the use case scenario for mobile robot is shown in the YouToube videos below. This work is done in real time.

Data Acquisition for PHM Tool from sensors and Analysis

For the tutorials of PHM Tool: