15 people participated in the ROS Applied Trainings held in Eskişehir Osmangazi University Robotics and Computer Laboratories lasting 2 and a half days between 26-28 September. 9 of the participants were students, 1 was an academician and the remaining 5 were from the private sector. The interests of the participants are as follows; Robotics, Computer Vision and Drones. 6 participants came from outside of Eskişehir for training.
During the training, participants had an introductory level of Linux and Python training. Apart from this, they have made examples with many ROS applications from beginner to intermediate level. Thanks to these applications, the participants learned about the structure of ROS and the application development integrated with Gazebo. On the last day, the training ended with real robot mapping, the use of the robot arm, visualization of the robot and the environment with visualization and the realization of the navigation package. As the feedback from the participants, it was stated that the Linux section was a bit intense but they were very pleased with the ROS applications and the Q & A activity. 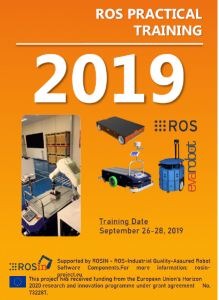 On the first day of the training, Assoc. Prof. Dr. Ahmet YAZICI and Dr. Uğur YAYAN talked about the current situation in the Robot and Autonomous Vehicle studies and mentioned the studies carried out in Eskişehir in these fields. Assoc. Prof. Dr. Metin ÖZKAN has covered autonomous robot control architectures, software tools and middlewares. After completing the “Linux History and Distributions”, “Linux File Structures”, “Code Development and Compilation in Linux” trainings, “Introduction to Python and Applications” training was given by Dr. Abdullah Taha ARSLAN. 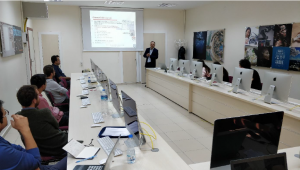 On the second day of the training, ROS training was given by Research Assistant Muhammed Oğuz TAŞ. In the ROS training, informations about the installation and distributions are provided. The necessary Linux information for ROS is explained again. Node, Topic, Msg, Srv structures and Publisher-Subscribe, Service-Client structures of ROS are explained practically. In addition to this, preparation of ROS environment, structure and creation of catkin, TurtleSim applications were explained to the participants. By making practical examples in Gazebo, the interaction between ROS and Gazebo is shown by Research Assistant Sezgin SEÇİL. 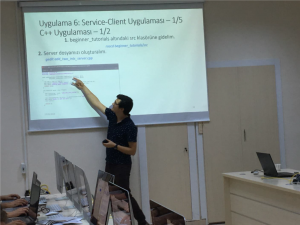 On the last day, training about the application on Kawasaki Robot Arm and visualization in Rviz was given by Research Assistant Sezgin SEÇİL. R&D Engineer Didem ÖZÜPEK TAŞ gave general information about Mobile Robots and Autonomous Carriers. On the ATV (Autonomous Carrier Vehicle), mapping the environment using the Navigation Stack package and using the extracted map to move the ATV autonomously, visualizing the laser data were performed. Finally, the questions of the participants were answered and the training was ended. 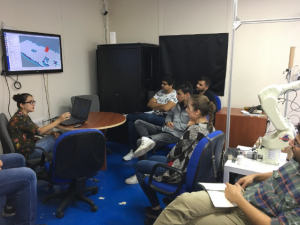 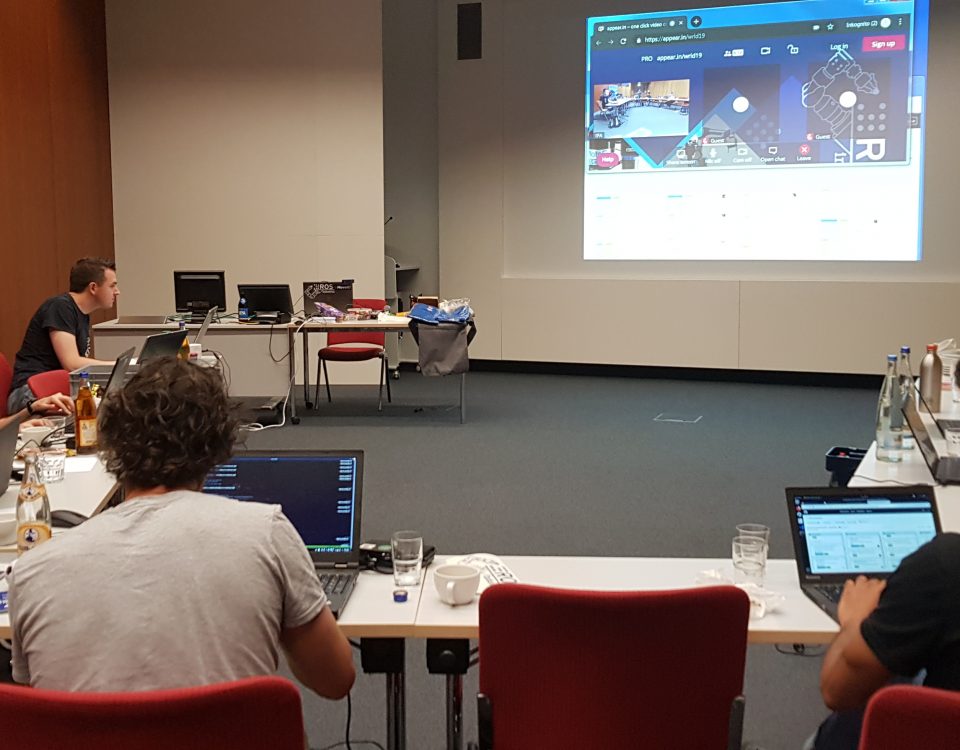 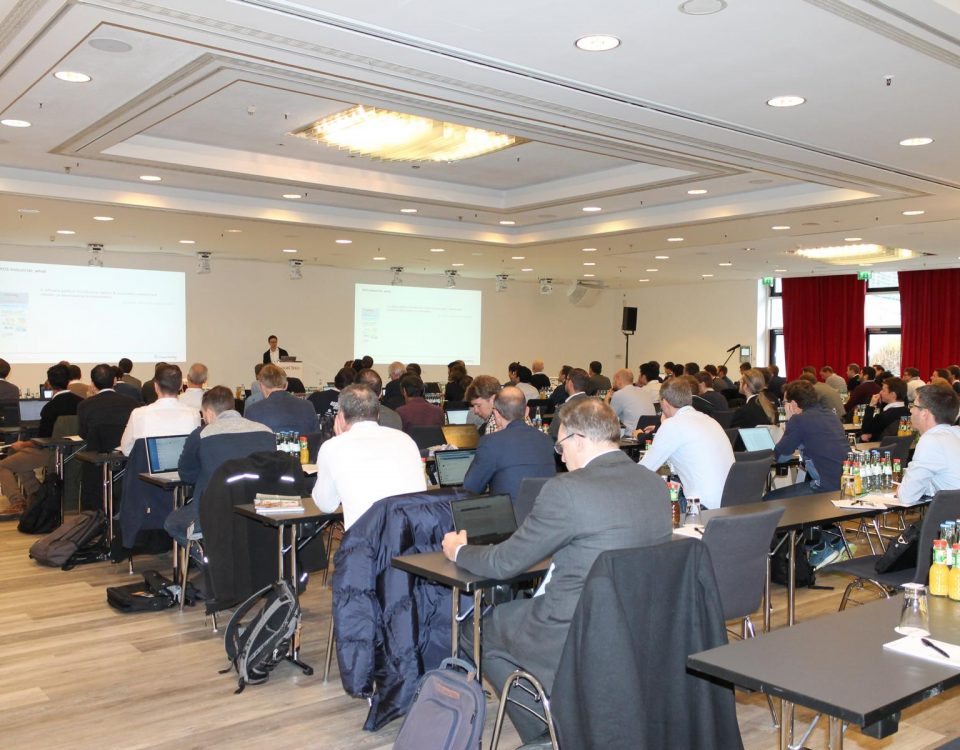 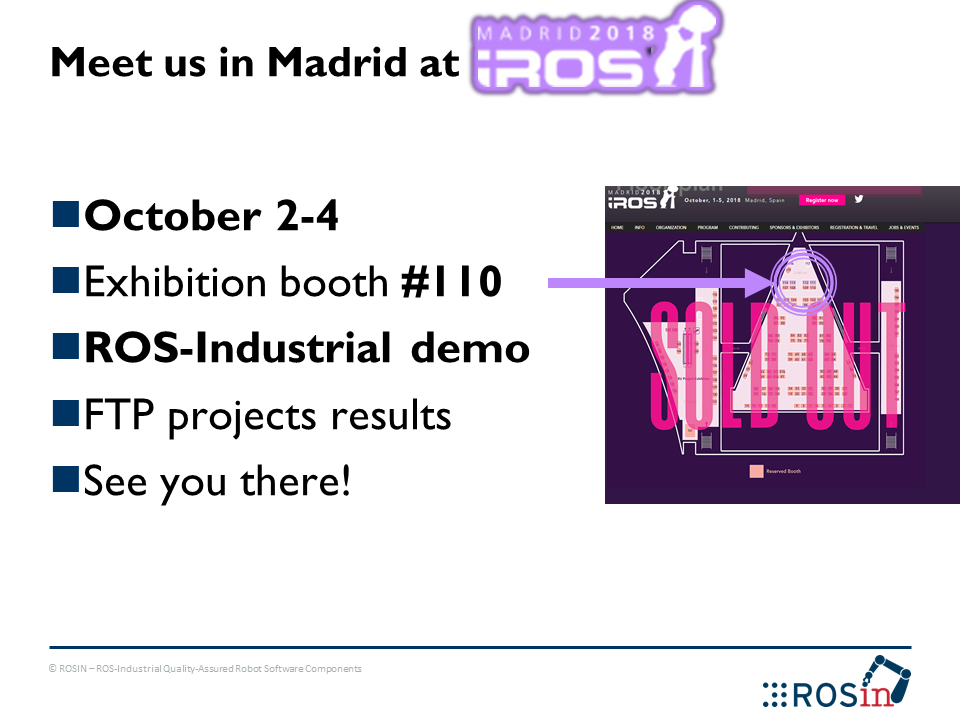 Exhibiting at IROS 2018 in Madrid